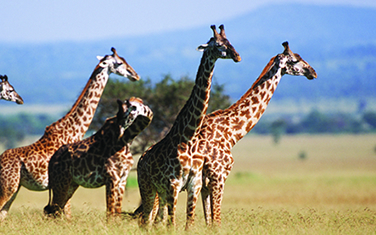 Lesley Kaye has been out of Africa for more than a decade, but her heart still is there.

The 33-year-old Zimbabwe native launched her business, Discover Africa last April as a niche travel agency in Beachwood focusing primarily on arranging business and personal travel to that continent. Ms. Kaye was confident there was demand for such a business; she said she generated sales of about $3 million a year on southern Africa trips as an inde pendent contractor for another travel agency, Flite II Travel Inc. in Beachwood.

"In opening Discover Africa, we're mar­keting what we know and what we love to do," Ms. Kaye said. "My whole life I spent traveling the parks of South Africa, Zim­babwe or Botswana." Ms. Kaye, a travel agent in South Africa, moved to New York in 1987 to work for the government-owned South African Railways Travel, which since has closed. She’s noticed a definite shift in the demographics of trav­elers to South Africa since the late 1980s.

"At that time, apartheid was rife. We either got the extreme right wing, which was difficult to deal with, or we got the rich-and-famous, people who were after the exotic or adventure travel," she said.

When Ms. Kaye came to Cleveland in 1990, she tried her hand at being a tradi tional travel agent, booking trips to the Caribbean, Las Vegas and the like. She didn't enjoy it, and later that year joined Flite II as an independent contractor specializ ing in trips to southern Africa. At Discover Africa, many of the high-end trips Ms. Kaye and office manager Mari anne Claus arrange for clients cost $20,000 or more. However, Ms. Kaye said she has seen more people of all income brackets discovering Africa over the last five years.

"There's a lot of expatriates living in North America, so they will call us to go home for family," she said.

"Now everybody wants to go."

Moore McMahon, a corporate insurance broker in New York, has gone a dozen times. He said he began booking his trips through Ms. Kaye at South African Rail ways Travel and continued after she moved to Cleveland "because she knew what she was doing, especially for that part of the world." "It's like getting services from a bou tique travel agency," Mr. McMahon said. "They're always getting feedback. They'll ask what you thought of this and that. What’s good for somebody might not be good for the next person that goes. They're pretty good about thinking that through."

At one end of the spectrum is the Elephant Back Safari in Botswana, which runs about $1,100 per day per person, not including air­fare. At the other extreme is a $40-per-night stay in the Kruger National Park.

She or Ms. Claus visit southern Africa at least once a year to stay current on which accommodations and transportation providers best suit their clients' needs. Client Betty Barrisch of Mayfield Heights appreciates the effort.

"She's very knowledgeable about the people that she deals with," said Mrs. Bar risch, a frequent world traveler who made a trip to southern Africa earlier this year with her son. "Even though she may not have met some of the drivers or the people she makes reservations through, she's taken quite awhile to make sure she's deal ing with the kind of people she wants to deals with (and) who are reliable."

Safety typically is a big issue for Ms. Kaye in arranging trips for clients.

"You've got to be so careful when you go down there," she said. "You're in the middle of the wild, you're basically rely ing on knowledgeable staff. Game walk freely through the camp. Every one of them will make our clients sign dis claimers saying they are not responsible" for injuries.

While Mrs. Barrisch chose a plan that included chartered air travel to each site some travelers prefer to drive. Depending on their destinations, Ms. Kaye often coun sels against it. "I'm hesitant to have clients drive from Johannesburg to Kruger National Park number one because of carjackings, and number two, because the road fatality rate is tremendous," Ms. Kaye said. "I would have no problem with someone driving themselves around Zimbabwe, with the exception that, yes, they could have their car stolen. But the people are very peaceful. If you got robbed there, they'd thank you."